How Many Megapixels is 4K – Help Guide

4K resolution is simply a 4000-pixel display resolution. Cameras using 4K display resolution were first developed in the year 2003. This technology was advanced by different research groups in universities all over the globe, for instance, The University of California. Different 4K standards are used in various display gadgets. For example, in digital television display 3840 ×2160 (4K UHD), approximately 8.3 megapixels are used, whereas, in the movie filming industries, 4096×2160 (DCI 4K) is frequently used. 4K stands for ultra-high definition. It enhances the provision of resolutions through the horizontal pixels. 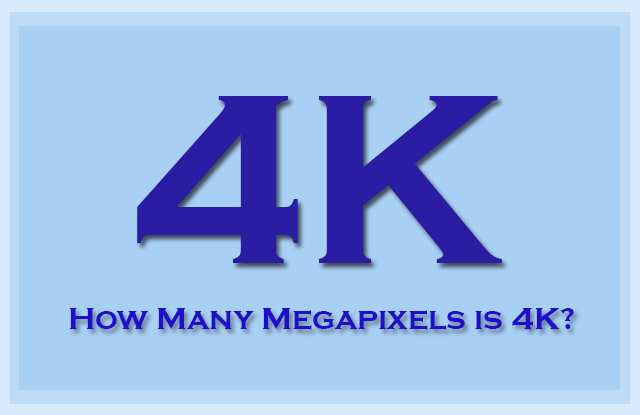 Therefore, when dealing with 4K, we focus on the pixels within the rectangular frame’s horizontal region. The clarity in videos and picture color in 4K has led to several television and screen manufacturers embracing this technology as the most significant market advantage. A true UHD should have the least display resolution of 3840×2160. High-Dynamic Range (HDR) is also essential for a UHD screen to produce unique pictures; for instance, HDR10 is used by Sony and Samsung.

Several streaming sources like Netflix and Amazon have integrated the use of 4K technology in their framework. Ultra HD Blu-ray Discs are also used for compatibility. DirecTV and Dish can also deliver 4K content (either live or recorded) through the consumers’ satellite. 4K produces smooth edges and depth of the display; that is, the viewers hardly see the screen’s pixel structure. This shows that the 4K technology has highly improved the display mage quality and revolutionizes its viewing experience.

Moreover, just like the television screens, we can also find cameras with such high definition. Such cameras require high-capacity SD cards that are compatible with them for them to be functional. The range of resolutions is 1280×1024 pixels as the lowest resolution and 3648×2752 pixels as the highest. A megapixel camera has more than a million pixels, and an HD camera has a resolution of 720p or 1080p. A 720p HD camera still takes good quality photos and videos even though it’s not regarded as a megapixel camera. Those are determined by the type of camera needed.

In situations where the video is concerned, additional pixel numbers may influence the color and the video clarity. Therefore, in cases where the consumer is required to choose the quality of a television screen or camera, pixels should not appear as the only consideration. The introduction of 5K to the market has reduced market prices for the 4K gadgets, making them more affordable.

4K has also been referred to as ultra-high-definition. However, there is a slight discrepancy between the two, with 4K defined as 3840×2160 4K resolution, which is the ultra-HD’s direct definition. However, both terms have always been used interchangeably, which has led to an alteration in its definition over time. First, after introducing this 4K technology into the market, it was quite hard to find content that this resolution could play.

The Society of Motion Picture and Television Engineers in 2007 promulgated SMPTE ST 2036-1 that did define the guidelines for two UHDTV systems. These systems were the UHD TV1 and UHDTV2. These standards defined such features as a 3840×2160 (UHDTV1) or 7680×4320 (UHDTV2) resolution.

The UHDTV did not define other official names; henceforth, ITU instead used 4K,4K UHDTV, or just 4K UHD about 3840×2160 system in public proclamation and information released by the press. Afterward, the ITU-R UHDTV, later on in 2012, advanced to CEA Ultra HD, which featured a resolution of 3840×2160. It also could enhance image processing by the color space available.

This is the most common 4K resolution found on display appliances. It was developed after the 720p (1280×720) and 1080p (1920×1080) resolutions, hence also called the 2160p. It is the UHDTV1 format resolution designated in SMPTE ST 2036-1. It is also used in ultra HD exhibitions and projectors. It has a total number of 8,294,400 pixels. This figure directly doubles the 1080p horizontal and vertical resolution and triples the 720p horizontal and vertical resolution. Due to a lack of customer interest in 3D televisions, they were upgraded to display UHD resolutions. This was in the year 2013.

This resolution, as stated earlier, is commonly used in film production industries. It has a total of 8,847,360 pixels, which is roughly 8.8 megapixels. The Digital Cinema Initiatives defined this as the standard resolution of a 4K container. With dependence on the aspect ratio desired, the DCI allows a variety of other resolutions for the information in the container. Those resolutions allowed are defined in the SMPTE 428-1 and include the 4096×1716 CinemaScope crop, the 3996×2160 flat crop, and finally, the 4096×2160 full frame. Moreover, movies made in 4K can be produced, scanned, and then eventually stored in several other resolutions. This depends on the storage aspect ratio used.

This resolution was established in the year 2013. It is still used in the cinema industry, more specifically in special screens for reexamining motion pictures.

This resolution with an aspect ratio of 16:9 was first unveiled by LG and Apple companies in 2016. It was used in their different 4K monitors. The LG Ultrafine 22MD4KA 4K monitor is a good example of these monitors.

This resolution has an aspect ratio of 32:9. The 49-inch Samsung C49HG70 was one of the first screens to use it back in the year 2017. It was also referred to as Dual Full HD (DFHD) by Samsung.

What Techniques Do Photographers Use?